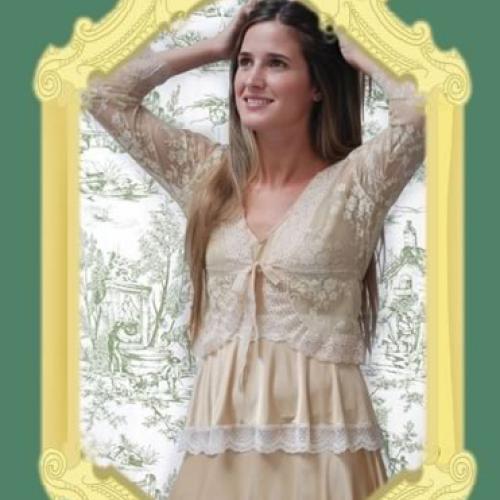 Thinking in bohemian, romantic and feminine women seeking their appearance reflects that personality, Anita Miguens began in 2003 to design and sell their items to friends and family. Today she works for her own clothing line combining classic and adapting the latest fashion trends.

With a romantic and chic hippie Anita Miguens is committed to contrasts. Indian fabrics, antique lace and flowered gauze, is found in almost all sets, both day and night. Her clothes designed for women bohemian and romantic of all ages are unique, comfortable and easy to wear, with cuts that reflect the designer's personal style.

Beginning in 2007, Miguens took out a brand new Anita Lina clothing for weddings and cocktails. They are versatile garments that mix creating unique sets. Oriental silk skirts and jackets in corduroy or velvet live together with simple T-shirts or tops sequined lycra garments creating ideal to be splendid at a party.

Member of a traditional family, chose to study Business Administration. Her professional career was in large enterprises, always focused on their profession. His first steps into the world of lamoda started as a game.

In 2006 Anita Miguens opened his first clothing store in Palermo. Original and exclusive design is reflected in each garment. The fabrics imported from East corduroys and velvets mixed with creating a romantic and hippie chic.